The benefits Of Autonomous Robot UVC disinfection In Hospitals 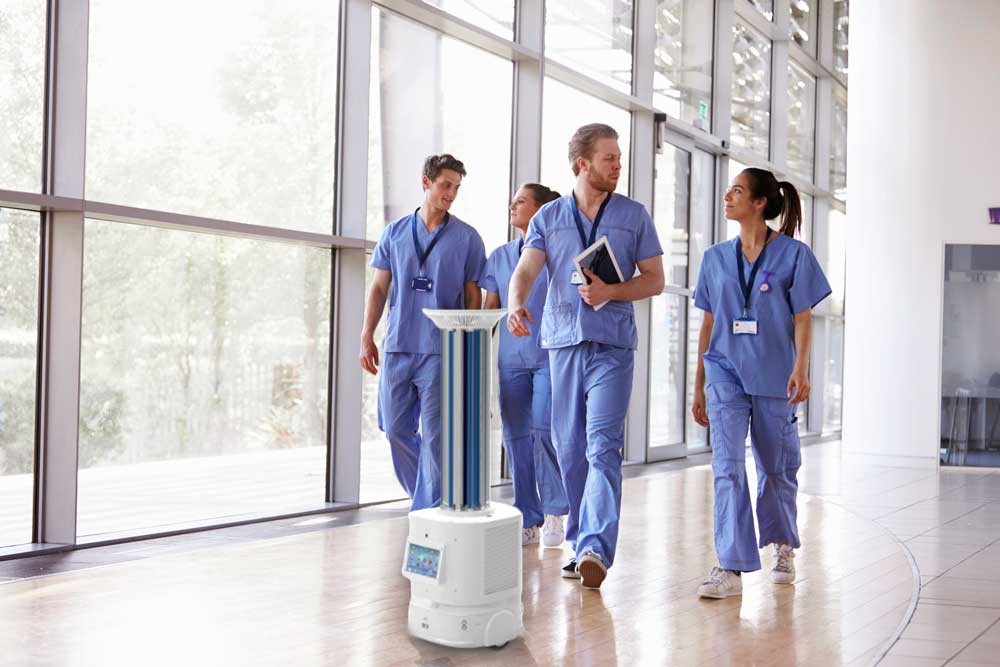 Hospitals are on the front line in the fight against a global pandemic. Doctors, nurses and other clinical and support staff are having to follow the most rigorous of hygiene standards to help defeat it.

They have a new ally in the fight against COVID-19 and other viruses. Autonomous UVC robots are now working in hospitals across the globe. Using a bank of short wavelength ultraviolet-C lights that produce enough ultraviolet to break down and destroy the DNA or RNA of bacteria, viruses and other micro-organisms autonomous robots are transforming hospital hygiene.

The Disinfectant Robot is made up of a mobile base unit that is fitted with sensors and a set of UV lamps that are mounted on top. The robot is driven around the area you want to disinfect the first time allowing it to scan the space and to create its own digital map. You then input on the map where you’d like the robot to stop and perform disinfection tasks. It will then operate entirely on its own returning to its recharge station after completing its assigned task.

Scrupulous disinfection by hand takes time and can be laborious. It needs to be repeated daily taking up valuable manpower that could be redirected elsewhere. To do the job properly using chemical disinfectant can be a considerable use of resources. Rooms and equipment cannot be safely used until the process has been completed. Robots will take on average between ten and fifteen minutes to disinfect a room. Killing viruses, bacteria and micro-organisms with ultraviolet light is quicker and more thorough than using chemical disinfectant.

Disinfectant chemicals are powerful toxins. Their overuse can be harmful to both humans and the environment. Using UVC Robots in hospital settings instead of chemicals reduces the exposure of staff and patients to these chemicals.

With the best will in the world, humans can often become less than methodical when asked to perform boring, repetitive tasks. This isn’t a problem with autonomous robots who will carry out their task rigorously and speedily each time. If bacteria, viruses or micro-organisms are missed they can become a breeding ground for even more infection.

Every task completed by autonomous robots can be tracked and recorded by the robot’s reporting software allowing for a thorough picture of how well the hospital is being disinfected to be built up and referred to.

This may be a good place to introduce yourself and your site or include some credits.